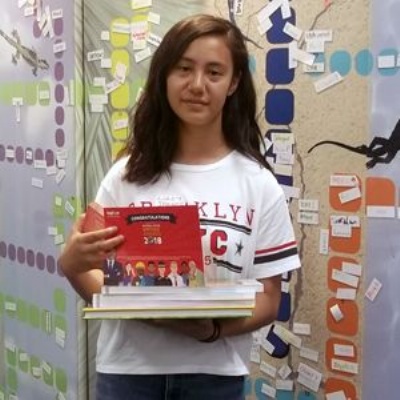 There were  39,000 submissions to the National Young Writers’ Awards this year.  These included 25 entries from Ms Baldwin’s year 8 English class!

For the past nine years, Explore Learning has been inspiring children to write, from the young authors in the making to those a little more reluctant.  This year's theme of ‘heroes’ inspired some really heartfelt stories, some wonderfully original writing and some tales that really made the judges laugh!

We’re absolutely delighted to congratulate year 8 student Lucy, who was named the regional winner for the East Midlands, an incredible achievement. Lucy was invited to an exciting celebration evening with Explore Learning on Monday 25 June. She had the opportunity to read her entry out loud and was presented with her award, a certificate of achievement and some special prizes.

"Come on, Betty!" I called down the hallway, fumbling for my keys. "We're going to be late." She, however, took little notice and ambled through the door into the chaotic morning rush. Eager to not miss my bus, I followed, walking briskly into the busy streets.

The city was awakening – the hum of the traffic and the chatter of the people and the song of the birds were all tell-tale signs of a new day. As I hurried along, Betty now by my side, the sweet aroma of freshly baked goods drifted out from the local bakery, momentarily distracting me from my inevitable lateness. Caught in a daydream, I continued along my usual route, the sun's radiant rays warming my skin.

This trance came to an abrupt end though as the piercing ringtone emanating from my phone dragged me back to reality. Turning a corner, I snapped sharply, "Yeah? I know what time-". Without warning, I was cut off mid-sentence by the blaring horn of a car.

I froze. Time froze. What was seconds felt like an eternity. Instinctively, my eyes snapped shut as beads of sweat dripped down my forehead. My fingers had turned to butter, causing my mobile to crash to the floor, confused voice still echoing through the speaker. My mind was numb; the ability to focus had suddenly become a luxury. Like a rabbit caught in headlights, fear had paralysed me.

As if it was moving in slow-motion, I felt the car edge gradually closer. Its breaks screeched in protest whilst its horn, with one final plea of desperation, attempted to alert me of the incoming danger. Unable to react, I knew that this warning was in vain. I knew that the impact would be fatal. I expected it to be over. But it wasn't.

A firm tug on my wrist pulled me back to safety, rebooting my senses. Stumbling madly over the curb, the rush of wind from the car sent me into a fit of spluttering . Surrounded by murmurs of concern, I sat on the pavement, trying to recover. Realising that my eyes were still clamped tightly shut, I blinked but the world refused to go into focus...

All was dark – as per usual. Stood beside me was Betty, my guide dog, panting heavily after the morning's disarray. Resting my trembling hand in her fur, she continued to guard me, watching intently to ensure my safety. Something which, when alone, was impossible.

Blindness, to some, is a curse. To be stripped from such a simple talent that is taken for granted by most can seem so inhumane. To be forever viewed as a cripple can break those with the thickest of skins. A guide dog, nonetheless, is oblivious to this 'flaw'. To Betty, I was a best friend, someone who she was selflessly willing to endanger her own life for. Her acts of heroism meant I was here today. With ambulance sirens wailing in the distance, I decided that grateful was an understatement.