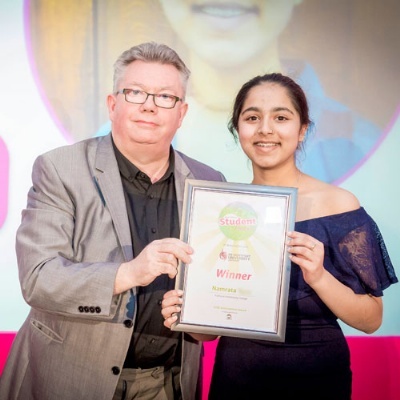 We are so pleased to announce that Fullhurst leaver, Namrata won the Leicester Mercury Student Awards GCSE Achievement Award which was presented by Ian Davis of Leicester Riders .  Congratulations Namrata!

The Leicester Mercury Student Awards highlight the achievements of outstanding individuals throughout the city and county.  On Thursday 8 December shortlisted candidates attended a glittering awards ceremony at the king Power Stadium and the winners were announced.

Namrata won the GCSE Achievement Award.  Her GCSE results were outstanding, achieving 10 A* and 3 A grades.  Her grades overall were the best in her year group and the best in our 25 year history! Namrata achieved this despite her first language not being English.   This was due to her incredible work ethic, grit and determination.  To be the highest performing student, in the highest performing school in the city, is extremely impressive.