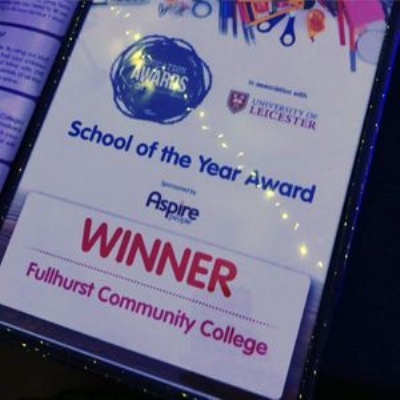 The annual Leicester Mercury Education Awards ceremony is always a wonderful evening and full of inspiring stories about the fantastic work being done in local schools and colleges! Fullhurst Community College was proud to be shortlisted for three awards this year at the glittering award ceremony which took place at the King Power Stadium last night.

We are extremely proud to announce that Mr Tom Bagley won the Newly Qualified Teacher of the Year Award!  The award recognises Mr Bagley’s innovative and creative use of IT in his teaching of Product Design.  Having seen that the use of video would be a powerful tool in teaching his subject and one that would reach all of our students, including those with EAL and SEND; he spent many hours videoing himself doing aspects of technical drawing that he then used in lessons.  Students can also access the videos after the lesson to aid their own learning and be independent.  Huge congratulations to Mr Bagley who fully deserves this recognition for his innovative teaching as an NQT and also his commitment to the college and our students.

Mr Carl Perry was a close runner up in the Support Staff of the Year Award.  Mr Perry is a fantastic TA who goes above and beyond, doing an amazing job in our Learning Centre.  The  students that he works with think the world of him.  He is an incredibly positive role model despite the many challenges he is faced with, often on a daily basis.

The excitement built towards the climax of the evening and the announcement of School of the Year Award.  We were shortlisted alongside three other exceptional schools and were overwhelmed to be announced as the winner of the award; a fantastic achievement that reflects the hard work, dedication and commitment of everyone connected with Fullhurst.

Collecting the award, Principal, Mr Steve Piggot stated, “This award reflects the hard work and effort from all of the students, parents, governors and the amazing staff who work at Fullhurst."

In 2017, Fullhurst's examination results were ranked in the top 2% of schools nationally, having only eight years before been in the bottom 10%. In addition to this Fullhurst was recognised by the Department of Education as secondary regional champion at the Pupil Premium Awards 2017. These achievements would be impressive in any school, but given the context of Fullhurst, they are even more so; over 50% of our students are from disadvantaged backgrounds and approximately 35% speak English as an additional language.

The progress made by the college is phenomenal, because alongside these record examination results huge improvements have been to all aspects of college life.  Be it partnerships with businesses like BT, national recognition for work with more able students, the establishment of our community radio station, the expansion of the allotment, football teams representing Leicester City, student take over days or the Christmas hamper appeal, the college has positively impacted upon the lives of both those attending the college and the wider community.  Due to this success record numbers of students have gone onto sixth form college and further education.  We will be expanding from 900 to 1500 students over the next five years, enabling us to transform the lives of even more young people. 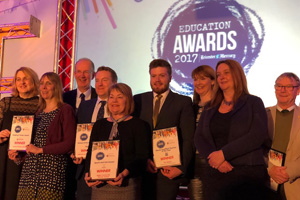